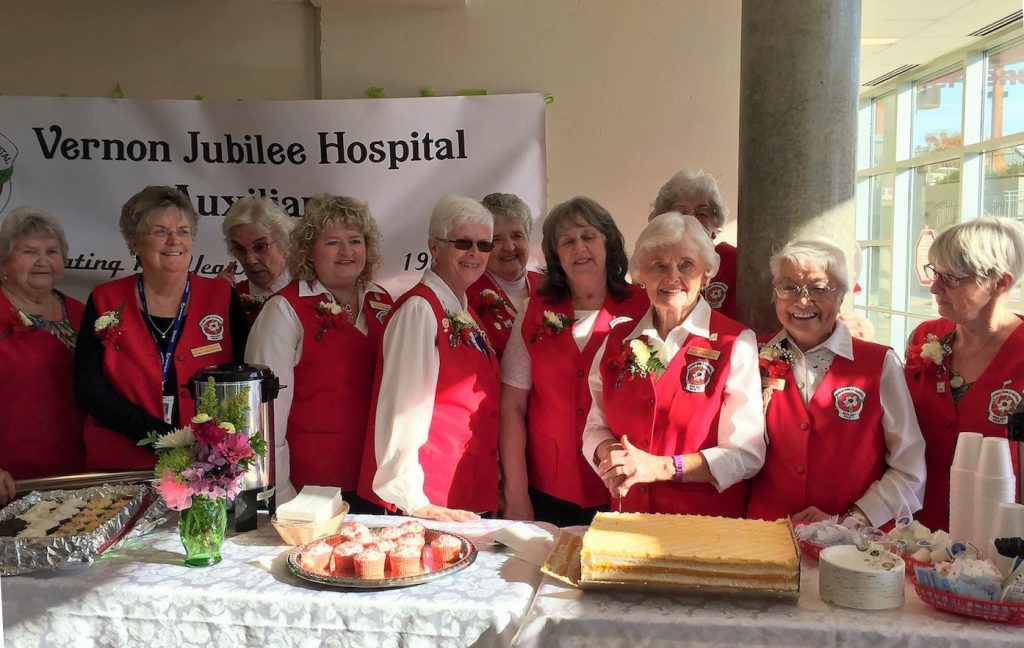 The VJH Auxiliary was presented a beautiful trophy by Interior Health CEO Chris Mazurkewich in recognition of 110 years of dedicated service to the Vernon Jubilee Hospital.  The award was accepted by Valerie Tribes, Auxiliary president, and is proudly displayed in the gift shop window at the hospital.

Over 200 people gathered in the hospital lobby for coffee and a special cake cutting.  This celebration provided a great opportunity to visit with current and past Auxiliary members, including ten past presidents, hospital staff and members of the public. 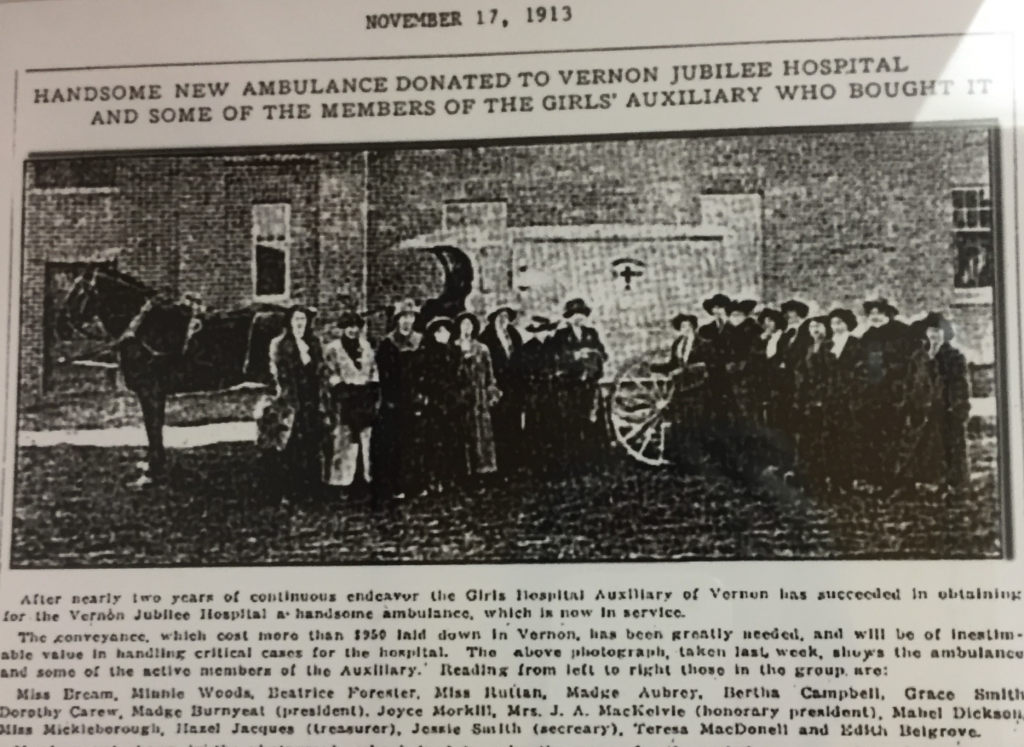 In 1913, the Vernon Auxiliary made its first major equipment purchase for the hospital – a horse-drawn ambulance at the cost of $950.  In 2017, the Auxiliary’s major purchases were a Pulmonary Function Machine for $87,628 and a Video Imaging Chair for $14,025.

Congratulations to the Vernon Auxiliary and its membership for their century-plus achievements and for the circle of giving that began in 1908 and continues today. 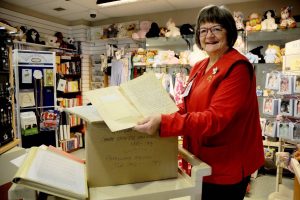 “75 years of priceless service” is the headline that appeared in the Trail Daily Times earlier this year.  Pictured here: Allana Ferro, BCAHA Kootenay Boundary Area Director, Trail Auxiliary past president, and longtime Auxiliary volunteer opens the original minutes book from 1943.  Ferro’s connection to the Trail hospital goes back to 1966 – 1969 and her youthful role as a Candy Striper.  In recent decades, the Auxiliary has donated over a million dollars to the Trail hospital. 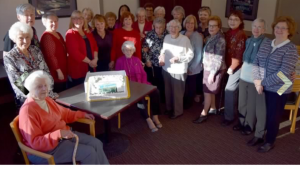 The Squamish General Hospital Auxiliary celebrated its 65th Anniversary with a luncheon at the Squamish Valley Golf Course.  A scrapbook was created to mark this milestone and long service awards were also presented at this special event.  Leona Ingraham and Peggy Tinney received a certificate and pin to mark their 50 years of dedicated service.

The Lake Auxiliary to Cowichan District Hospital (now the Lake Healthcare Auxiliary) was founded in September of 1967 when Adelle Watson’s mother saw a need for support at the brand new hospital in Duncan, B.C.  Adelle, her mother and a small group of local ladies met and formed the auxiliary.  They volunteered in the hospital visiting patients, serving tea, working in the gift shop, and wherever they could be of help.  They held bake sales, craft fairs, and knitting bees and used the funds to supply items for the care and comfort of the patients.  Over the years, the Auxiliary grew and changed its focus to include more fundraising. 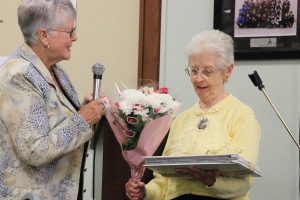 On September 27th an Afternoon 50th Anniversary Tea was held at the curling club where founding member Adelle Watson was honoured and presented with a beautiful History of the Lake Healthcare Auxiliary scrapbook from 1967 to the present.  On October 1, 2018 the now, Lake Healthcare Auxiliary held a celebration dinner at the Honeymoon Bay Resort with 72 guests in attendance.  BCAHA President Lynda Avis and our MLA Sonja Fursteneau attended along with other guests from the community.  It was a fitting tribute to 50 years of service to healthcare and to the community. 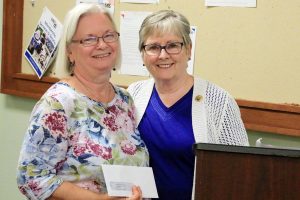 Lynn Budding, President of the Lake Healthcare Auxiliary, receives a symbolic cheque – one dollar for each year of Auxiliary service to the community – from Lake Cowichan Councillor Carolyne Austin (right).