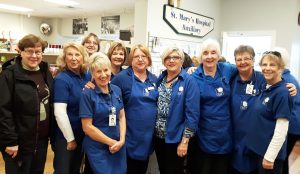 On Saturday, January 28, the Sunshine Coast Healthcare Auxiliary celebrated 50 years of running a thrift store to help raise funds to support healthcare on the Coast.  Its location at 5693 Cowrie Street, Sechelt, opened in 1981 and the building was replaced by the current facility in 1987.  The Thrift Store occupied one-half of the space with a fast-food restaurant on the other.  By the early ‘90s, business had increased and the Auxiliary took over the whole premises.

The building had originally been donated to the St Mary’s Hospital Society and in the mid ‘90s when the Government disbanded these Hospital Boards, the Hospital Foundation was formed to hold the Society’s assets.  The Foundation generously supports the work of the Auxiliary by renting the building to them for $1.00 a year. 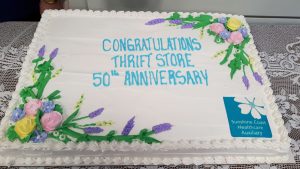 The building has recently re-opened following a much needed face-lift.  New racks, lighting and layout have effectively increased display space by at least 30%. More than 200 volunteers spend many thousands of hours a year sorting, displaying and selling clothing and small housewares donated by the community. Last year, sales topped $500,000 for the first time ever.  Customer feedback about the renovation has been very favourable. (Reprinted from Sunshine Coast Auxiliary Facebook.com)

← Across the Province President's Message →